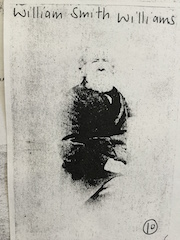 William Smith Williams, my great great uncle, discovered Charlotte Bronte and was a rock of encouragement to her.

William and his wife Mary had eight children, among whom and whose progeny there were a number of fascinating and significant people.

Anna Williams was a celebrated singer and was Professor of Singing at the Royal College of Music in the late 19th century. Sir Arthur Dickinson was one of the founders of Price Waterhouse in the USA. Goldie Dickinson was a fellow of King's College Cambridge, mentor of EM Forster, and who worked on the formation of the League of Nations.

I am currently researching with a view to writing the story of this intriguing family and placing my research on pages on this blog.

Posted by PhilWriter at 07:48 No comments: