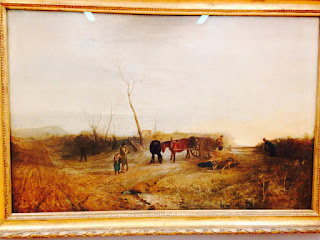 A Frosty Morning JWM Turner, the Tate Gallery, London
William Smith Williams was a great admirer of Turner. This is a. Essay on a Turner I love very much.
Overall the impression of the painting is of cold silent blue/brown space. There is a horizontal split of one third land and two thirds sky. To the right the sun is just rising, making yellow the otherwise brown/grey cloud. To the left a chestnut coloured track runs into the distance. Central is a stick of leafless tree, to its right two horses, a cart and two labourers, to its left a man and a child. All stand cold on frozen ground.

Looking in more detail, central and just below the skyline there is a tiny bright red dot on the saddle of the horse harnessed to a cart. The eye is drawn from this to the chestnut of the horse’s flanks to the right, thence to the cart and two working men, one, the older wearing a cloak, the other not. The figures are either side of a fenced gap in the hedgerow above which, in the distance, the brightening of the sky heralds the rising sun. If the eyes are kept to the right of the paining, the hedgerow between the second figure and the far edge is dark. The figure, stooping and elderly, is shaded from the warming rays of sun and so remains cold. The other figure, younger, has perhaps shed his cloak because of the warming sun but more probably through exertion. At his feet is a pile of frozen turnips to be hacked loose and loaded onto the cart. But back to the right hand side, the whole bottom right corner is dark. In the foreground are the remains of summer’s cow parsley. Moving back toward the cart there is a wheelbarrow, a spade stuck in the ground and the missing cloak lying, a blue/green with a surprising sense of quality. There is also a pick and what might be a shovel.

Standing central to the painting, facing the viewer, although more intent on finding edible grass on the frozen ground, is a dark horse being nudged by the head of the chestnut. Behind him there is the continuation of the hedgerow glowing in the rising sun. Behind is a stick of a tree, little more than a sapling. By the sapling is a beast in the field and, just covering the beast’s neck, is the leafless tree. This is still of no great stature, but it leans to the left, perhaps evidence of the east wind, and carries a fork and slender branches.

Under the shade of the tree, were it summer, stands a gentleman in hat, greatcoat and boots. He is leaning on a shotgun looking toward the labourers and rising sun. His un-gloved hands are around the end of the barrel. A red scarf is just visible around his neck. Beside him and looking toward the viewer is a young girl. She has a lighter blue/green coat, a brown cape and bonnet but most forcefully what looks like a dead hare draped around her neck. They are standing where the sun can reach them on the frozen ruts of the track. Centre foreground is a frozen puddle picking up the reflection of the sun.

To the left is the track stretching into the distance, first, in the sun, a warm chestnut and then in dark shadow from the continuation of the hedge. In the shadow perhaps ten yards behind the gentleman there is the figure of a boy wearing a black tunic and trousers.

At the end of the track there is a stagecoach. Looking more closely, the horses are visible in front; it is heading toward the figures. Behind the coach is a small hill. The left hand of the track, and the edge of the painting, are bordered by a bank or hedgerow lit by sun. The ruts run along the track save for two, which veer to the place the cart is at rest.

The style of the painting is a mix between painterly brush strokes particularly on the ruts of the track, possibly a pallet knife on the frozen puddle, but the wheelbarrow and tools are finely painted. The pallet is limited so that the only brightness is the rising sun. The colours are natural. The feeling from looking at the painting is of being there, actually feeling the cold. Perspective is suggested by the narrowing of the track into the distance.

The painting seems to be about change: human change linked with the motion of nature. The sun is rising and its warmth is changing the frozen earth. Its light too is dispelling darkness. It is warming the gentleman and child and, unnecessarily, one of the labourers.

There is a stagecoach approaching. In smaller images of the painting it is unclear whether it is approaching or departing. The difference is crucial. The approaching coach will change the scene, if only by its passage. It may be that the viewer is invited to infer that it will take away one or more of the figures, or perhaps the unseen painter. Either way it is a foreign invasion, just as the sun is foreign as it invades the night.

The faces of the characters are not finely painted. However, the gentleman appears pensive if not exactly sad. The girl is wearing a possibly quizzical expression. The faces of the labourers are unclear, the face of the boy in black is expectant and looking directly at the viewer, or is it artist?