Amber Adams, editor of Brontë Studies wrote a lovely review in the October 2020 edition volume 45 issue 4. You can read it by following this link, or by accessing through the members area of the Bronte Society website.
Sharon Wright writes on Twitter: 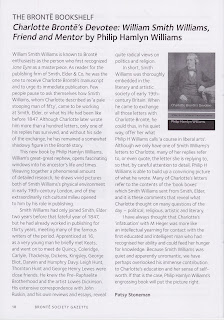 I have just finished reading my copy of Charlotte Bronte's devotee, What a thoroughly enjoyable and learned read. Lovely to read the correspondence between William and Charlotte. Absolutely brilliant book, would HIGHLY recommend it. Also many thanks to Philip for my signed copy.

Brontë biographer, Rebecca Fraser, wrote:
“The mysterious publisher William  Smith Williams has always been the unsung hero of the Brontë Story. Not only did he discover Jane Eyre, he was Charlotte Brontë’s friend and supporter. In a fascinating book Smith Williams is at last brought to life thanks to the forensic skills of his great, great nephew.” Rebecca Fraser

An 'Amazon Customer' posted this review:

I found this a very readable book, one that I could relax with.
It was fascinating to learn how closely involved William Smith Williams had been in bringing the talents of "Currer Bell" (Charlotte Bronte) to the British public. Reading about the difficult task of being a Reader for the publishers, whereby he always gave constructive criticism of books which he had not recommended for publication as well as for those which he had recommended, made me realise how many, many hours he must have spent with huge numbers of manuscripts. To have been really honest with Charlotte Bronte about her subsequent books after the success of "Jane Eyre" would undoubtedly have been very hard.
This book, while focussing mainly on his relationship with Charlotte Bronte, shows how involved he also was with other well known authors such as Ruskin and Thackeray. It gives the modern reader a snapshot of life in early Victorian England and provides a mine of information about Smith William's direct descendants and relatives, food for thought in an age fascinated by family trees.

Lily's Mum posted on Amazon:
A delightful and well-researched book on a fascinating man
I struggle to think of anyone who wouldn't be interested in this story because so many people seem to be connected to him. Do you have an interest in the Bronte family? Ruskin? Rossetti? Thackeray? Lawrence Alma-Tadema? George Eliot? Mrs Gaskell? All crop up in this tale of publishing and friendships, with a healthy dose of sudden death and dodgy marriages thrown in to boot.

I love how much detail there is in here. I was tickled by the fact that in the early years of the nineteenth century, the road between Westminster and London was beset with highwaymen so MPs had to travel in groups for their own safety. From the first, Williams was a man of connections, counting John Keats as a schoolmate and from his first foray into publishing could count Thomas Carlyle amongst his friends with correspondence from Dickens.

Of course, it's for his friendship with Currer Bell (or Charlotte Bronte, as she is more usually known) that we acknowledge Williams today. His recognition and encouragement of Charlotte's talent from the first builds a close and lasting friendship. Reading her letters to him (treasured and preserved by the family) are a treat and make you wish that his letters had also been kept. Indeed, the one we have reminded me of the treatment of the one letter from Fanny Cornforth quoted in Paull F. Baum's book of Rossetti's letter to Fanny. The Bronte Encyclopedia suggested that this letter from Williams to Charlotte showed Williams to have 'no great skill in writing and that the ambitions which frustrated him so were based more on fantasy than fact' which is a sweeping statement for one letter, especially one written on the occasion of Emily Bronte's death. It is obvious from Charlotte's responses to his other letters over many years that his letters brought her joy.

One of the unexpected joys of the book are Charlotte's comments on being a woman at the time, many of them offered while Williams still (on the face of it) believed he was corresponding with a gentleman. On the subject of female further education, Charlotte was enthusiastic - 'Whenever I have seen families of daughters sitting waiting to be married, I have pitied them from my heart.' I absolutely loved the comments she got back from Poet Laureate Robert Southey after sending him some of her poems - 'Literature cannot be the business of a woman's life, and it ought not to be ... the daydreams in which you habitually indulge are likely to induce a distempered state of mind.' Well, he's a keeper.

This is an easy read because the tone of the narrative is so friendly and conversational from a writer who obviously loves his subject and wants you to love it too. I feel I know figures in literary history just that bit better after reading this and my opinion of Charlotte Bronte has risen greatly. I knew pretty much nothing of Williams beyond his part in Bronte's publishing life but found his achievements as fascinating as his personal life. The friendship he shared with Charlotte was not all plain sailing especially with Mrs Williams (at least in the perception of Charlotte) and one quote from Charlotte on friendship really struck a chord with me:

'In the matter of friendship I have observed that disappointment here arises chiefly - not from liking our friend too well - or thinking of them too highly - but rather from an over-estimate of their liking for and opinion of us.'
In these times of on-line, written friendships, I find that to be unfortunately true and wise words indeed.

You can find this review  also on the blog of Kirstie Stonell Walker, author and student of the Pre-Raphaelite Brotherhood,

Cheryl Pivac posted this on Amazon New Zealand. Cheryl is descended from William's wife's family and let me have some wonderful family letters:
"Don't just read this book once ~ Read it TWICE
Some books you read once... this book I read twice.


The second time I got even more from this book a wonderful insight into a truly gentle man of great wisdom and ideals.


Philip has made William Smith Williams come alive within the pages of this book. Well done!"

Fran Manning is William's great (3x) granddaughter and she wrote this:


“Thank you so much for transporting me back into the lives of our family and their friends, and into the streets and homes of mid Victorian London and to Haworth Parsonage. As a result I now feel that I  know my 3 x Great Grandfather, his family and some of his friends as real people. I can also feel the environment in which they lived and the passions that drove them in their daily lives.
The extensive research, attention to detail, entertaining and reader-friendly style, and honesty in reporting made it a wonderful read. I found the skilful connections you made of events and people at a particular time to their appearances in previous or later chapters very helpful”.

The Library of Bishop Grosseteste University has included the book in their display for the Lincoln Book Festival 2019. 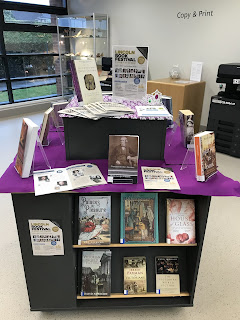 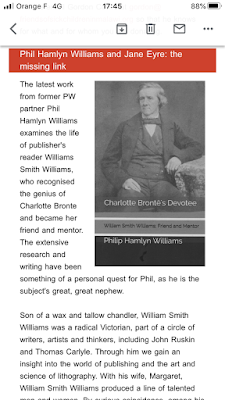