William Smith Williams was buried in the magnificent Kensal Green Cemetery. His obituary in the Publishers Circular told of him having many friends, some of whom stood round his grave at his burial on 20 September 1875. 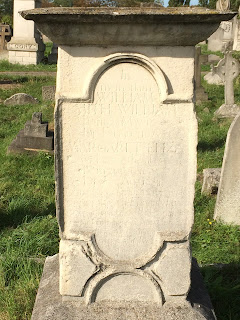 The obituary in the Athenaeum, for which he wrote for many years, said that 'literary taste was excellent and he had great powers of discernment. His judgement and opinion regarding works was very highly valued, especially among young authors. His kind smile and gentle manner charmed all those who had the pleasure of knowing him'.

His grave plot was purchased in 1864 by his daughter in law Emily Williams, nee Epps, a celebrated artist. It may be been her with his many children who survived him who paid for the memorial, the lettering on which may be by AC Gill.

Members of the London and South East Branch of the Bronte Society realised that the stone was being eroded and the inscription would soon no longer be visible and so they commissioned a plaque to be placed beside it. They were kind enough to ask me, as his great great nephew, to unveil it which I did on 20 January 2018.

It is a fitting memorial to an unassuming but significant man of literature. 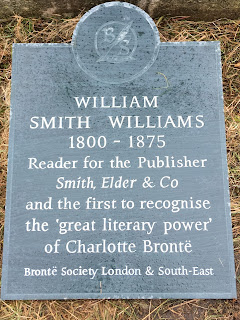 It would be interesting to know what he would have thought of it, for in 1843 he wrote a piece for the Athenaeum on memorials, which included this:

This is not a poetical age; fitting emblems are few, and not very intelligible: a flower snapped from the stork is almost the only graceful and expressive emblem of youth and innocence. In the Kensal Green Cemetery is a tomb with a dead lamb sculpted on it, which, besides looking unsightly, awakens ideas of the shambles; and we remember to have seen a dead bird which at once carries you to the poulterer’s. The broken column is not so bad but these, and all similar emblems, are anything but hopeful. The Greeks symbolised the soul by a butterfly; we, in this material age, typify the soul in a bodily form. If it will wish to express the changes the mortal part of us undergoes after death, our scientific notions might suggest a retort and receiver. Not being a poetical people, we are, therefore, incompetent either to invent or understand symbols, and it would best to avoid them altogether.


William Smith Williams was buried in the same grave as his son Robert. The remains of his daughter Ellen and his wife would join his in 1882 and 1888. The adjacent grave would contain the remains of his son in law, Lowes Dickinson, and his daughter Fanny Emily. His legacy would last longer than than of many of those in his rather remarkable circle.