William Smith Williams and his love of art

Most people know William Smith Williams as the man who discovered and mentored Charlotte Bronte. His passion for art was at least as strong as that for literature. He wrote on art for the Athenaeum, Spectator and Examiner; he presented a masterly paper On Lithography to the Society of Arts; he wrote a precursor to the Pre-Raphaelites in John Bull and on the place of art in design for The Builder. He was a friend of John Ruskin; he had hands involvement in publishing his later works; he edited the Selections of the Writings of John Ruskin published by Smith, Elder in 1861.

His obituary in the Publishers Circular said of his later years that:

He became so absorbed [in assessing the work of authors] that he ceased to write himself, and became more warmly friendly with many writers whose names are known to all the world and whose friendship and esteem he never lost. Amongst these may be named Leigh and Thornton Hunt, WM Thackeray, the Miss Brontës, John Ruskin, Miss Kavanagh, Mrs Parr (Holme Lee), Egerton Webbe, George Henry Lewes and many others including a great number of painters.

I had just read your article in the John Bull; it very clearly and fully explains the cause of the difference obvious between ancient and modern paintings. I wish you had been with us when we went over the Exhibition and the National Gallery; a little explanation from a judge of art would doubtless have enabled us to understand better what we saw; perhaps one day, we may have this pleasure.

As I said his paper On Lithography is masterful and has some wonderful illustrations. 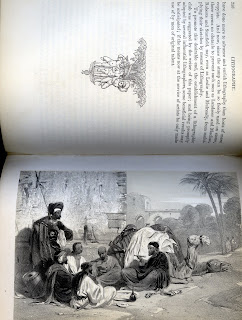 With thanks to the RSA

I write more in my forthcoming article in Bronte Studies and, of course, in the draft of my biography of this true Renaissance man