William Smith Williams is best known as the reader at Smith, Elder and Company who discovered and mentored Charlotte Brontë.

Less familiar is his relationship with John Ruskin. He edited the 1861 Selections of Ruskin’s Writings and then handled the publishing of Ruskin’s works on political economy until his retirement, after which Ruskin moved his publishing to George Allen.

Ruskin was of course best known for his writing on art; William’s passion for art was perhaps as great as that for literature. He wrote extensively on the subject, including a masterly paper which he, in collaboration with Sir Henry Cole, presented to the Society of Arts, entitled On Lithography.

William and Ruskin possibly first met when the former worked for lithographer, Charles Hulmandell and the latter with his father visited their Marlborough Street premises to collect a subscriber edition of Samuel Prout’s Sketches in Flanders and Germany.

When next they met it not clear. On 3 February 1844 a lengthy review of Modern Painters by a 'Graduate of Oxford' appeared in the Athenaeum. It was scathing. Who was this young pup saying such modern nonsense? William was, certainly in 1843, a regular contributor to the Athenaeum magazine; I have found some eight art and theatre reviews which he wrote that year. It is clear that William certainly would not have agreed with the scathing review. He shared with Ruskin a love of Turner, especially early Turner landscapes which they both felt followed the path set out by water-colourist, Samuel Prout whom they both admired.

Once William had joined Smith Elder, I feel sure they would have been in contact as Smith, Elder published Ruskin’s works on art and architecture. They became more closely connected after 1860 when Ruskin fell out with George Smith over the publication of articles on political economy in The Cornhill.

The University of Lancaster is home to a wonderful archive of John Ruskin's work. I spent some time there looking at his diaries and some of the other manuscripts he left.

To me of greatest interest was the 1861 first edition of Selections from the writing of John Ruskin edited by William Smith Williams. It is an Aladdin's cave. It shows the breadth of his interest, from fine art, through architecture to political economy. William had followed Ruskin from the beginning and so was in the perfect position to make the Selections.

In the 1860s, Ruskin turned his attention to political economy and wrote a series of articles, together under the title Unto the Last for the Cornhill magazine, published by Smith, Elder. He then wrote further lectures which came together in a number of books. In the archive there are personal letters from Ruskin to William concerning the publication of these.

Ruskin wrote to WT Page, Mayor of Lincoln, that "I have always held (and am prepared against all comers to maintain my holding) that the Cathedral of Lincoln is out and out the most precious piece of architecture in the British islands,1 and—roughly—worth any two other cathedrals we have got."

An article on my research was published in Brontë Studies in April 2019 and shows that William Smith Williams was very much a Renaissance man who attracted both friendship and respect from many of the nineteenth century’s leading writers, artists and thinkers. He knew Carlyle, Thackeray, Elizabeth Gaskell, George Eliot, Ford Maddox Brown and the Rossetti’s among many others. He is buried in Kensal Green Cemetery with his friend and son in law Cato Lowes Dickinson, under a monument designed by AC Gill. Lowes Dickinson taught with Ruskin at the Working Men’s College. 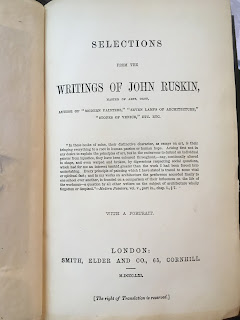 With thanks to the Ruskin archive