To handle the proof copy of a book is a surprise and a delight. All those years of research, thought and composition finding a material form. This book, though, is self-published, since, whilst a number of publishers and indeed competition judges liked it, they did not think it sufficiently commercial. We shall see!

Self-publishing has necessitated paying a proof reader, happily a very good one; and, as I say in the introduction, any errors are mine alone. Self-publishing has also meant that I could not see the overall design until now. I am pleasantly surprised. I hope you are. 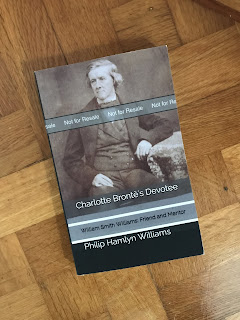 It has been a long time in the making. It was 2006 when Norman Penty contacted me because my name appeared in the family tree he had researched of William Smith Williams's family. Over the intervening years, I explored the family further. It was in Paris, in a hotel near the Pantheon where I read the chapters on William Smith Williams in Juliet Barker's The Brontës, when I began to realise just how little was known about this significant man in the Brontë story. This spurred me on.

I researched further and, as I say in the introduction, found his brother-in-law Robert Hill's letter telling of the obituaries of William. I loved my visits to the archives at Haworth, Lancaster and Edinburgh, finding in each the sort of gem that makes you want to shout out - not something approved of in archives. I made contact with William’s relatives in Australia and New Zealand and they let me have family letters and photographs. Brontë biographer and former chair of The Brontë Society, Rebecca Fraser, read, liked and offered helpful suggestions to improve my draft. I was invited to write a paper on my research for Brontë Studies, and thoroughly enjoyed my correspondence with its wonderful editor Amber Adams.

I will be speaking about Charlotte Brontë’s Devotee at the Lincoln Book Festival in September.

The book is now available to buy on Amazon in paperback and Kindle edition.
Posted by PhilWriter at 01:33