Richard, William's brother, exhibited at the Great Exhibition of 1851. He managed the business of Weiss & Son at 62 The Strand, just over the road from where he was born.

Weiss made surgical instruments. Lindsey FitzHarris has written a fascinating book on 19th surgery entitled The Butchering Art, and I draw on this to paint a picture of the world Richard Williams sought to serve. When he started out, surgery was largely a matter of dexterity. There were no anaesthetics, and so speed in operation was of the essence. There were no antiseptics and experience had also taught surgeons that the only operations, where the patient had any real chance of survival, were those as least invasive as possible, and, even then, the patient was more likely to die than live. Richard would have witnessed the opening of the Charing Cross Hospital, not far from Weiss’s premises. He may have witnessed operations, which were often public spectacles with a great deal of blood and gore. He would have been aware of the great strides made in anaesthetics in the 1840s in Edinburgh which saved patients the agony of experiencing the knife. It was a world that was progressing on many fronts and only a few years later antiseptics would begin to be used.

I have looked through the catalogue of the Great Exhibition to write my latest book, How Britain Shaped the Manufacturing World. It is to be published by Pen & Sword in June 2022.

Bronte lovers will know what Charlotte thought of the Great Exhibition, as she wrote to her father on 31 May 1851: 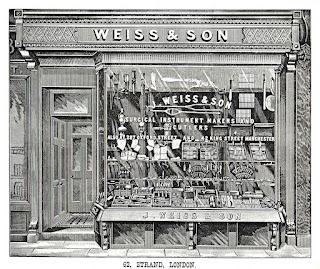