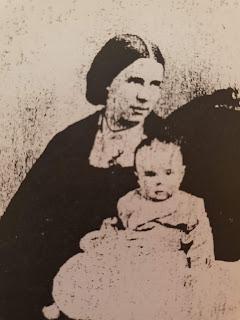 Ellen and Margaret Williams, with thanks to Cheryl Pivac
In the early 1850s William's eldest son, William Frank (known as Frank), emigrated to New South Wales with some guidance from Elizabeth Gaskell then a friend of Charlotte Bronte. He married in Sydney in 1855 and he and his wife Ellen had a son and a daughter. There is reason to believe that Frank died before his father (1875).

Norman Penty, who did so much research into William's family tree, traced Frank's progeny to Mark Wasson and Stephen and Kent Warner who live in Sydney. If anyone knows them, I would love to make contact.

The only other Australian connection I have come across is that William read Catherine Spence's Clara Morison but declined it with a letter similar to that he sent to Charlotte Bronte on reading The Professor.

Thank you so much, Australian cousins, for getting in touch. The picture in filling in a fascinating way.